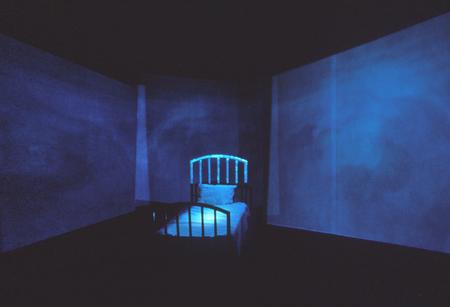 ​Excerpt:  Dawn Dedeaux employs various media, including photography, print, film, and video in her efforts to make political art that goes beyond mere documentary reportage. Like Sister Helen Prejean, the subject of Tim Robbins's Dead Man Walking, a very conventional film, she is from New Orleans and very concerned with the underclass, specifically black youths abandoned to lives of violence and incarceration. For a number of years she has been working in prison with these young men, exploiting them, as she is very aware, at the same time that she is teaching them to present themselves with all their contradictions. Very knowledgeable of contemporary trends in photography and video, she is also aware of their inherent limitations.

In a piece from 1991, Super Convergence: January 27 1991 (The Day Mickey went to Baghdad), shown at the Houston Center for Photography, she installed a 12-foot by 10-foot grid of over 70 photos on one wall and a 6-foot by 6-foot floor image. The work showed live television coverage of the 1991 Super Bowl mixed with live coverage of the Gulf War. There were also frames from the commercials, the most expensive of the year, for the "events" and views of the Disney half-time extravaganza and of an archaeologist discussing imperiled Babylonian sites. This is a critique of television in visual terms. Dedeaux is aware of the limits of "television" itself, of the ways that even "art" video pieces, the kind promoted by a number of curators at such centers as the Kitchen, merely reinforce expected responses, whatever the theoretical underpinnings of the sound/picture montage. Such pieces no longer have the power to alter perceptions; they merely reinforce whatever aesthetic or political views the audience brings to them.

For her exhibition at the Thread Waxing Space in New York (8 February-16 March, 1996), Dedeaux presented a number of vignettes from works in progress, the Free to Kill Series. These incorporated video, wall paintings, free-standing sculptural elements, and small room-size sets. The Face of God, In Search Of (1996), scheduled to be shown at the Nexus Center for Contemporary Arts in Atlanta during the 1996 Olympics, consisted of a raked platform, with metal studs on two sides and a plain metal bed at the center. On the plain wall at the rear was an eerie projection of various spectral figures and a violin body. In another piece, A Safe Home, the center of the gallery was nearly bisected by a metal wall running diagonally out from one side, this supporting six doors, each covered with a different example of the metal security grills increasingly seen now on houses of all classes. Between two of the doors was a suit of armor. During the opening night reception, there was a naked blonde male standing between the doors or walking near the raked platform.
Other works by Dedeaux at Thread Waxing Space included large-scale mixed media paintings, a tableau with a suit of armor in a closet, and a sound installation in a lavatory. In an alcove on the right side of the main gallery, a small room, Woman Eating Porkchop was constructed with the interior walls finished, but the outside uncovered to reveal the metal studs. By peeping through the window at the front, the viewer became a voyeur, spying a kitchen setting with a video monitor presenting a woman voraciously eating a porkchop. The viewer is, at the least, invading the woman's privacy by peering through the partially opened window; the viewer could just as easily be a robber or a rapist or . . . well.
Behind the barricade of doors Dedeaux placed a ratty easy chair facing a monitor and a wall, on both of which was a terrifying video, Drive-By Shooting, showing two black youths cruising inner city streets in a car until they happen upon the site of a drive-by shooting just as the police are arriving. This time it is a camera that the youths shoot out the window as they mark their territory, and the viewer is intensely affected by the awareness that it could just as easily be a gun that these youths are shooting. The last excruciating minutes show a young male drive-by shooting victim lying face down in the gutter, his recently purchased fast-food nearby. The seeming artlessness of the footage, its apparently unedited nature, intensifies the effect. Clearly Dedeaux has worked on the tape, yet that does not serve to distance the horror nor its concomitant morbid, even prurient, interest. By doubling the image through projection, she makes it more than pop sociology, with the commentator at the end to bring the easy moral which is the standard television treatment and response to this kind of footage. She does not mediate through words or facile sermonizing, but forces the audience to confront its own culpability, its own involvement, without escape.
The two Hardy brothers, whom Dedeaux taped not long after they were acquitted in 1990 for a shooting that left one man dead and four injured, have been implicated in a number of crimes over the years. They were major figures in Dedeaux's multimedia exhibition Soul Shadows: Urban Warrior Myths, created for the Contemporary in Baltimore and shown in New Orleans at the Contemporary Arts Center in 1993. This huge installation, with ten rooms lining a central hallway, included projection rooms for Drive-By Shooting and for The Hardy Boys and Nancy Drew, which shows the brothers discussing the violent events of their lives. There were also huge hand colored photo-enlargements of the brothers, among others, in heroic warrior poses. In connection with its investigation of the execution of a woman set to testify against a New Orleans cop, the FBI seized the artist's raw footage of the Hardy brothers in October of 1995.

Dawn Dedeaux is perhaps the most striking of those artists who combine the ontological concerns of multi-media and video art with a political/social message. The scope of her work is so large and her imagination so fertile that she refuses to be limited by any formal boundaries. Furthermore, she refuses to be constricted by theory or by any kind of critical or social or sexual structures that might limit what she is doing. Her work is neither programmatic nor proscriptive. It exists as both a reality, physical and virtual, in itself and as a prescription for treating the malaise of the art world and as a tonic for the despairing.

THE FACE OF GOD, IN SEARCH OF 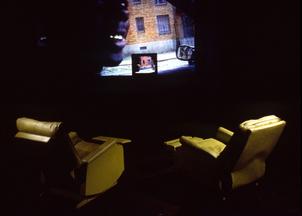 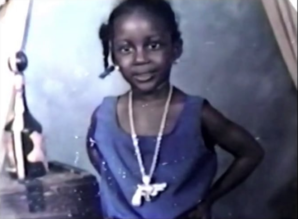 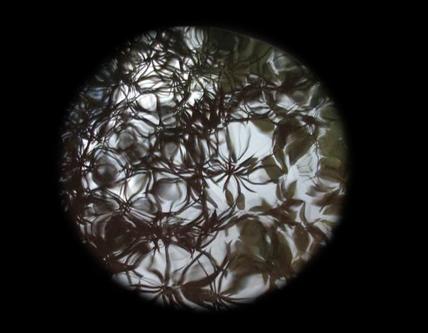 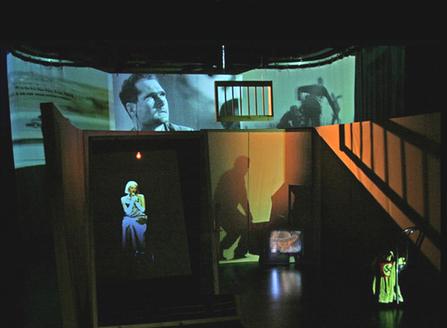 DRIVE BY SHOOTING: INSIDE.  OUTSIDE. 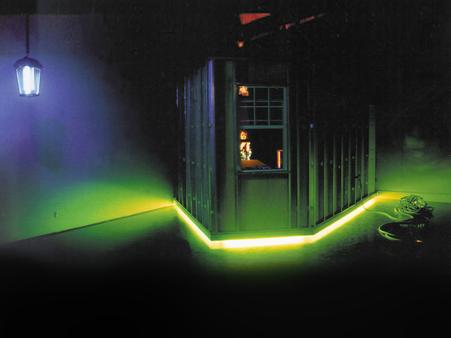 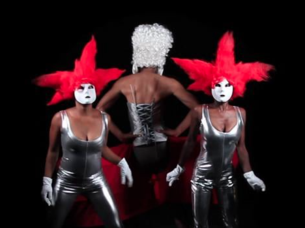 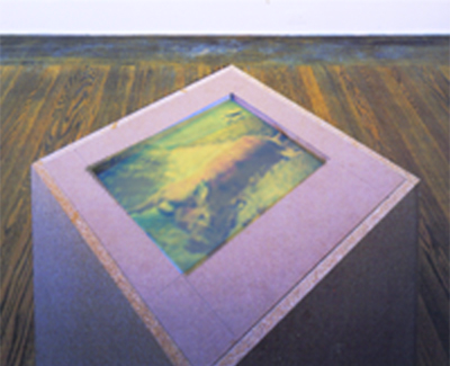