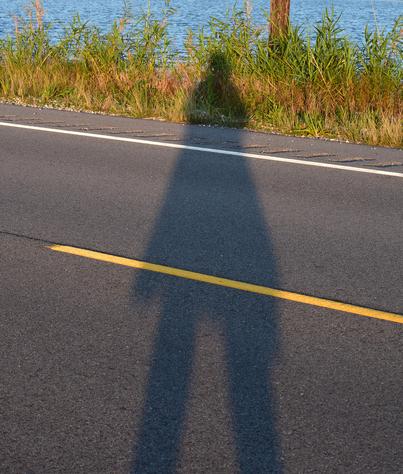 In many ways, coastal erosion is hard to understand. We resort to graphs, animated projections and imperfect analogies — for some reason, football fields always come up — to try and grasp the deterioration of the land surrounding the Gulf of Mexico.

“We’ve seen a lot of the aerial pictures [of coastal erosion] which are very disturbing. … To stand [participants] within this landscape will be a more visceral experience, and  convey that this isn’t just about loss of wetlands, it’s about loss of homes,” she says.

For the installation, DeDeaux is asking New Orleans metro citizens to join representatives from the United Houma Nation and Terrebonne parish on Island Road between Pointe-aux-Chenes and Isle de Jean Charles on June 25 at 1 p.m. It's an area many (including the federal government, which recently started resettlement programs) consider ground zero for the vanishing coast.  Participants will stand in formations that spell the word “home” from overhead; planes and drone cameras will capture the image.

A party that follows at the Isle de Jean Charles marina encourages meetings between people whose lives, livelihoods and culture are affected by the loss of the coast.

“Instead of just a work of art, I wanted to do an event that would bring people together … and get [city residents] to come here and see what’s really happening and be more supportive of efforts to restore the wetlands,” she says.

Above all, she's calling attention to the human toll of coastal erosion, and says it’s still too early for the fatalism which can pervade discussions of this issue.

“This is a problem of our own making,” she stresses. “We don’t have to throw in the towel yet. There are things we can do to buffer this area a little longer.”

It’s free to participate in the installation, but participants should register at Eventbrite. Free buses from the Contemporary Arts Center will transport participants to and from the Isle de Jean Charles (it’s about an hour ride). To inquire about the project or to offer sponsorship, contact DeDeaux directly or visit www.prospectneworleans.org.  KIM STORMQUIST for GAMBIT.

The arts community together with our partnering organizations have succeeded in making a work of conceptual art. We have succeeded in amassing the commitment of hundreds of people from south Louisiana to stand in unity on what will remain for now an imaginary road. For reasons unrelated to our mission to highlight coastal erosion, threats of violence aimed at one of our tribal nation participants have been taken seriously enough to prompt a postponement of the June 25th event.

This specific gathering was only one extension of a project that will continue; and it just may become a catalyst for a degree of reconciliation among area tribes - each under immense pressure to navigate the harsh challenges of life at the frontline of coastal erosion, a place where the ways of life are threatened.

This was an opportunity for all of us to put down our differences for just 30 minutes and focus on what we share in common - our deep love for this sacred Louisiana land slipping into the sea. The tragedy calls out for our immediate, collective stewardship - and forgiveness.

Ironically, a project titled END OF THE ROAD finds itself at the beginning of a new road, one that we hope you will continue to follow. And while our first official event is rightly postponed, I will still be there personally on Saturday, June 25th at 1pm, standing on Island Road as planned, holding a small sign scribed HOME.

My deepest gratitude to Prospect New Orleans, Terrebonne Parish Departments,  and our wide array of participants, volunteers and sponsors.

The Show Goes On.
Dawn DeDeaux

JOIN US for an Environmental Happening at the Epicenter

​of the Fastest Eroding Landmass in the World 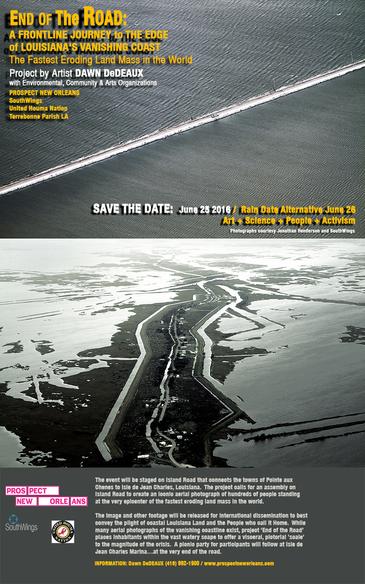 ABOUT THE FREE EVENT
​New Orleans and worldwide participants are invited to join local Native American and Cajun inhabitants, including the United Houma Nation, on Island Road that connects the town of Pointe aux Chenes to Isle à Jean Charles, in Terrebonne Parish, Louisiana.  We gather  in a day of unity to create an iconic aerial photograph capturing an assembled group who will stand at the very epicenter of the fastest eroding land mass in the world. The image and other footage will be released for international dissemination to convey the plight of coastal Louisiana Land and the People who call it Home.    While many aerial photographs of the vanishing coastline exist, “End of the Road” will place inhabitants and concerned citizens within the vast watery scape to offer a visceral, pictorial scale to the magnitude of the crisis. ​
THE PLIGHT OF COASTAL COMMUNITIES
The community of Isle de Jean Charles recently made national news as the recipient of a federal grant as one of the first programs of resettlement, in response to climate change, in the world. Under the terms of the federal grant, the island’s residents are to be resettled to drier land.   Other inhabitants the Isle, and thousands living throughout coastal Louisiana, have neither the means nor desire to leave.
SOCIAL MEET AND GREET TO FOLLOW
A gathering will follow at Isle de Jean Charles Marina with a band and the best jambalaya in the world.
​FREE BUS RIDES FROM NEW ORLEANS / RESERVE NOW
Please reserve your seat early for a free bus ride from New Orleans that will showcase films along the way.  Contact emily@prospectneworleans.com to reserve your seat.
PICK YOUR SPOT ON THE ROAD / FREE REGISTRATION
Everyone will gather along Island Road and will stand in formation to spell the word   'H O M E'.  Please register for free in advance so you can pick you own special place on the road.  Stand with your own group or new friends you will meet on the road.  Contact Emily@prospectneworleans.com to register.
COME BY LAND OR SEA / BOATS &  BIKES ENCOURAGED TOO
Boats are encouraged to surround Island Road.  Everyone should be in position by 12:45pm to be ready for the aerial photos that will be taken exactly between 1pm and 1:30.
BE ON TIME
Formation begins at 12:30 / Everyone ready for the Photo Shoot by 1pm / Photos completed by 1:30pm
EVERYONE ARRIVE NO LATER THAN 12:30pm
If journeying to the location on your own, please allow time to park and walk to your predesignated spot on the road no later than 12:30pm.
SPREAD THE WORD
To optimize the success of END OF THE ROAD, please Publicize the Event via your own Social Media Networks to enlist participants.  Bring your own group of family and friends.
DOCUMENTATION WILL BE AVAILABLE TO ALL
Dissemination of the aerial photos and other ground level documents will be available to environmental groups, all coastal Louisiana parishes, social aid agencies, tribal associations and local and international press.  The project media team is fully donating the work to public domain. 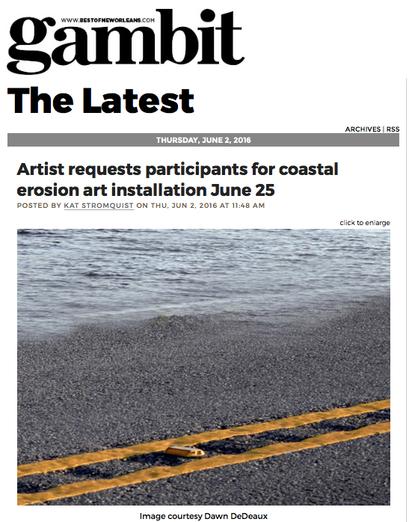