BY OSMAN CAN YEREBAKAN  ​​for CULTURED MAGAZINE

During the preview for Open Spaces 2018: A Kansas City Arts Experience on a rainy Thursday, curator Dan Cameron walked a group of journalists and donors through Swope Park. One of the largest urban greeneries in the country and a multifunctional site for recreational and cultural activities, the Midwestern landmark is a historical racial divider, a de facto “color line,” according to Cameron. “Dealing with the political, cultural and economic history of a place like Kansas City, while creating a framework for developing a project like Open Spaces, sometimes resembles investigative journalism, or even detective work,” explained the curator.
Swoope Park hosts the largest portion of the biennial works, including Jacob Burmood’s Draped Form, a cast aluminum sculpture of a draped specter that sits at the park’s entrance and Tree, Broken Tree, a reclaimed dead tree that artist Dylan Mortimer showered with pink paint and glitter to embody revitalization and survival. Also in the park is Dawn DeDeaux’s Free Fall: Prophecy and Free Will in Milton’s Paradise Lost—48 towering columns installed amongst walnut trees, each printed with reflective tape reading a verse from Milton’s “Paradise Lost.” It’s recommended to visit the work after sunset, when the reflective text better appears in dark—consider the evening of October 13 when Janelle Monáe will perform at the nearby historic Starlight Theater as part of the biennial’s concert series. The challenge to read Milton’s centuries-old, yet utterly relevant text about imperfections of human evolution in daylight emphasizes DeDeaux’s statement on our collective numbness and helplessness in the face of social decay. The piece is also an homage to Milton, who was blind when he penned his epic poem.​
The site’s scene-stealer is Ebony G. Patterson’s …called up, an orchestration of artificial flowers, plush toys and candles placed inside an abandoned pool that requires viewers to walk in a full circle in order to notice various objects that overall resemble a shrine. Built in the mid-20th century to provide therapeutic treatment for children with health conditions, the pool sits in a secluded section of the otherwise plain 1,800-acre park. A mirage-like find with its festive colors and naive innocence, the installation is far from surprising for followers of Chicago-based Patterson’s dazzling mixed-media creations. The viewers plunge into a bitterly whimsical realm, echoing the site’s solemn history with the artist’s ability to transform joy into contemplation. Neither debunk nor utilitarian, the pool encapsulates zeal and extinction alike.
Open Spaces also presents Kansas City Art Institute alumni Nick Cave’s glorious return to the city where he learned how to sew and dance. Doing justice to the all-encompassing art extravaganzas Cave has come to be known for, Hy-Dyve introduces an immersive video and sound installation, set inside a former church called Hope Center. During our visit, Cave put final touches to his dance club-like sensory undertaking—on par with his former Park Avenue Armory intervention, The Let Go, with its hallucinatory imagery and electric vibe. Meanwhile, Nari Ward’s ode to legendary Kansas City-native jazz saxophonist Charlie Parker is located at the Mutual Musician’s Foundation where Parker once played. A few steps away, the American Jazz Museum hosts Berlin-based Turkish artist Nevin Aladag’s interactive musical sculpture, Resonator, which is activated throughout a series of performances.

The most recent location of 21c Museum Hotel, the Louisville-based contemporary art museum and boutique hotel chain, exhibits Brad Kahlhamer’s sculptures of wire and bells, Super Catcher, Vast Array, at its historic dining room The Savoy, which preserves traces from its past life as a social landmark in the early 20th century. Chief curator of 21c Alice Gray Stites explains that, “The installation highlights the role of the artist as healer or shaman, bringing a sense of balance, compassion and inclusivity to a space originally designed to celebrate European-American expansion and the mythology of manifest destiny.”
Open Spaces 2018: A Kansas City Arts Experience continues at various locations across Kansas City through October 28th, 2018. 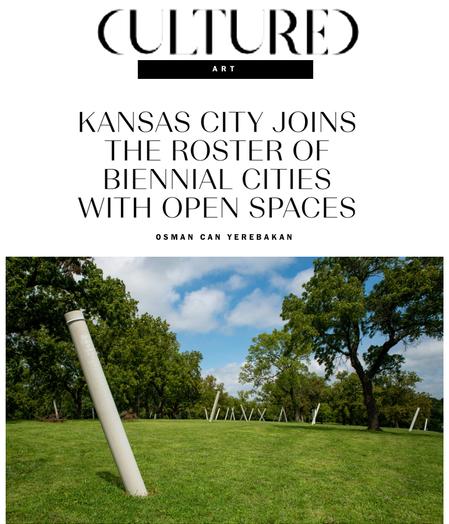 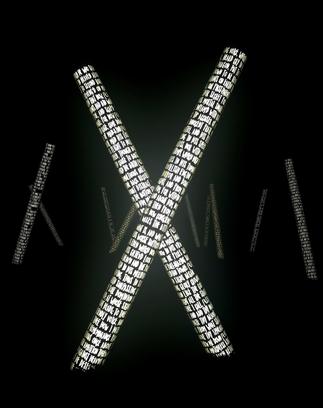