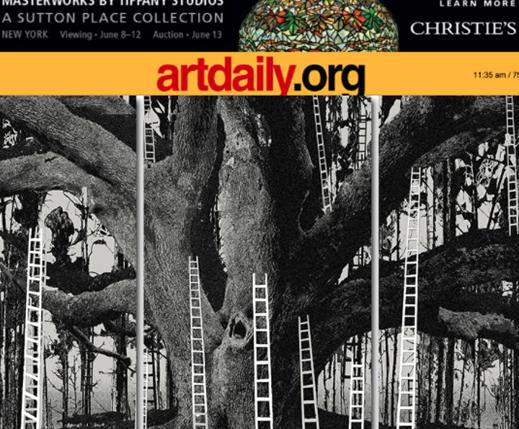 ABOARD THE MOTHERSHIP PART ONE: POSTULATIONS OF MYTH AND MATH Installation Partial View including "The Exploer, The MotherShip and the Exploding Suitcase" by DAWN DEDEAUX, 2013, currently on view at Centre for the Living Arts, Mobile AL 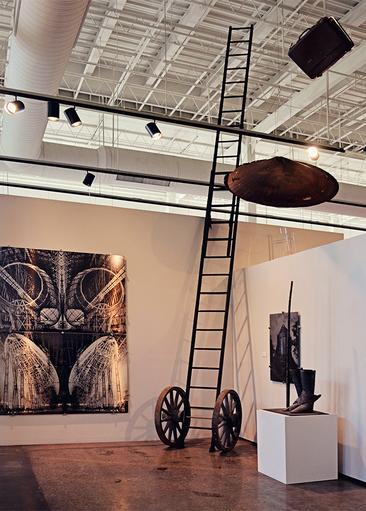 artdaily: THE FIRST ART NEWSPAPER ON THE NET

EXHIBITION EXAMINES FUTURE    The Centre for the Living Arts announces the opening Future Projects, a nine month exhibition examining the possibilities for the Gulf Coast, with focus areas that are both expected and unexpected.

DAWN DEDEAUX (New Orleans, LA). whose Prospect 2 New Orleans Biennial installation was critically acclaimed, has created an environment for Centre for the Living Arts that subjectively postulates the future through myth in her exhibition Aboard the MotherShip Part One: Postulations of Myth and Math.

Her installation, which reflects the thinking Carl Jung, William Blake and others, is infused with collective mythologies that foretell the future along with translations of hard mathematical and scientific equations that speak of a future not too dissimilar from myth.  This is evidenced througout the installation, most notably in the iconic horse placed on a ledge  20 feet above the main gallery staring at its own reflection below.  DeDeaux invites the viewer into a mysterious realm and examines the potential for an apocalyptic landscape through the lens of beauty, bring into question the role of aesthetics.

KENNY SCHARF (Los Angeles CA) who rose to prominence alongside fellow contemporaries Keith Haring and Jean-Michel Basquiat in the East Village art scene in the 1980s, has recreated an immersive psychedelic experience through his "closet" series - offering an altered state of perception that functions as a portal into a multi-sensory future.  Also included are a dozen of his major paintings, including the large-sized "Tang" and "Times Flies When You're Having Fun!", plus "Ultima Suprima" - a customized Cadillac that reminds visitors of past notions of the future. 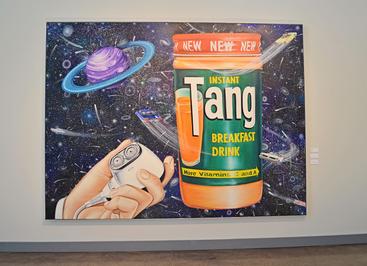 ABOVE: "Aboard the MotherShip"  by Dawn DeDEAUX 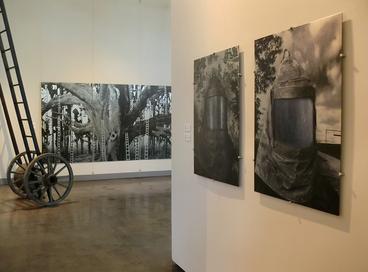 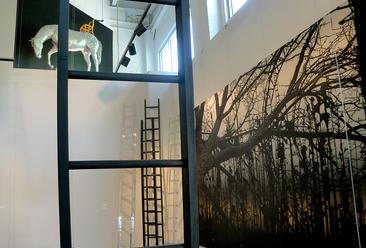 REACHING FOR THE STARS by  KEVIN LEE, / Mobile Laniappe

"FUTURES PROJECT IS DOMINATED BY KENNY SCHARF and DAWN DeDEAUX -

SCHARF IS THE LIGHT TO DeDEAUX'S SHADOW...."

“The future is now,” Bob Sain said, dispensing the obvious immediately. More than a platitude, the phrase was alive in the literal sense as the director of the Centre for the Living Arts (CLA) unveiled their latest exhibit: the Futures Project.  In a follow-up to last year’s blockbuster exhibition, the Memory Project, CLA’s downtown contemporary gallery Space 301 has been fitted with works from a smattering of some of the nation’s most famous artists. The result is more balanced than last year’s show, more energetic and engaging.

First let me state up front: the Futures Project is dominated by Kenny Scharf and Dawn DeDeaux. They have the greatest number of works there in addition to the largest in scale.  That’s no slight to the other artists. DeDeaux made an international splash with a massive installation at the 2012 biennial Prospect Two in her hometown of New Orleans. She’s gone large scale again in the Futures Project with her installation “Aboard the Mothership Part One: Postulations of Myth and Math.”
The first portion of DeDeaux’s work that catches the eye is a steadily revolving column of wooden chairs — entitled “Upon the Back of Others (Spiraling Chairs) — reaching nearly 30 feet from the gallery floor to the ceiling. The remaining pieces in the installation take aim at aspects of collective mythologies and how their prophecies dovetail with scientific equation.

DeDeaux employs a repeated theme of ladders — a mode of lonesome travel, ascending from the past into a better future — some cast from the most modern of materials while bear- ing mysterious ancient symbols. Other forms are charred, including timbers salvaged from a disastrous fire in DeDeaux’s own studio.  Large wall panels printed on metal and bear- ing darkened images of dirigibles and moody oaken branches give a gothic undertone to the viewing. While less overtly disturbing than the William Christenberry work that occupied the same space last year with its allusion to Ku Klux Klan activity, the sight of ladders in trees can’t help but call to mind tales of lynchings from a region where “the past isn’t even past.”

When viewers wander to the back and encounter the plexiglass panels with an aquatic transparency entitled “Six Feet of Water,” it’s undoubtedly sobering for anyone who remem- bers Katrina. And for those of us still close to sea level.

For anyone who has paid attention to con- temporary art of the last three decades, Kenny Scharf’s name is familiar. His work here has a whimsical sense that is the light to DeDeaux’s shadow. His implementation of Atomic Age pop iconography, from cartoon characters to the largest jar of imitation orange drink any astro- naut ever saw, dredge up past ideas of the future.  “When I was a kid in the early ‘60s, we were all promised we were going to space,” he said, admitting a fascination with “The Jetsons.” “When the ‘70s hit and it became obvious it wasn’t going to happen, I said, ‘You know what? Screw that; it’s going to happen in my mind.’” Scharf recreated a smaller version of his “Cosmic Cavern,” a now-legendary space in the bottom of his Brooklyn apartment building where he staged all-night go-go dance parties amidst Day-Glo flotsam from the modern world. The music implemented in the local version was compiled by his DJ from those previous events, Scott Ewalt.  Scharf has been busy, taking his noted love for graffiti art to the exterior of Space 301. His unmistakable style is a signature that something completely unexpected is emerging in Mobile.  “I love the fact that people who might not have known the museum was here are all going to know it now,” Scharf said. “It’s important to me because I know after the show’s over there’s going to be something that’s important to me that’s here.”

Near Scharf’s work is the chronological piece “Futures Present” from 2X4 (Two- By-Four), the Manhattan-based design firm responsible for CLA’s branding and web design. The idea implements digital media in selecting not only printed portions that will fill a wall during the exhibit’s duration, but also an audio component. All input is selected from real-time activity, highlighting the immediate nature of future projection.

The work of another New Orleanian, Candy Chang, immediately arrests the eye at that point. Chang’s “School of the Future” employs approximately 2,000 scarlet beach balls and an invitation for participants to join the piece. Not only are viewers enticed toward play, but also to sit at an antique desk and log in reflections on what should be taught to future generations.  Chang’s long-term plan is to approach the Mobile County School System about letting her use the now-vacant Barton Academy for an installation. Should they relent, the artist would use even more of the same inflatable balls in the external spaces of the old school in hopes of bringing it back to the public consciousness.

In a nod to the Memory Project and Xavier de Richemont’s overwhelming video piece “Hokushima,” a 100-to-1 scale model of his idea for the U.S.S. Alabama is on display. What he has imagined not only dwarfs the previous work, but would also put Mobile on the “art map” in a huge way if he could execute it.

West Coast artist Nina Waisman has created a mesmerizing gateway to the Video Gallery with her “Body Envelope.” Wands, wires and sensors hang like a techno-jellyfish’s tentacles and react to the movement of individuals through their midst, keying different soundscapes accordingly.