THE GODDESS FORTUNA AND HER DUNCES IN AN EFFORT TO MAKE SENSE OF IT ALL / Prospect .2

If a Giant Golden Lucky Dog; Glass Ladders to Nowhere; Revolt in the Factory of Pants; and the Goddess Fortuna played by Bounce Diva Katey Red is up your alley, then The Goddess Fortuna and Her Dunces, in an Attempt to Make Sense of It All by artist Dawn DeDeaux is the New Orleans art installation to see.

An interpretation of Pulitzer Prize-winning novel A Confederacy of Dunces written by the late John Kennedy Toole is planned for the Brulatour House Courtyard, one of the oldest courtyards in the French Quarter, as part of art biennial Prospect 2. The courtyard will play host to the dreamscape of the book’s protagonist, the haplessly bombastic Ignatius J. Reilly.

“The will focus on Toole’s inspirations for the book: the medieval Philosopher Boethius and the Goddess Fortuna, a gal frequently summoned throughout the pages of Dunces as the counsel to Ignatius,” explains DeDeaux.

​“Project Fortuna’s scope is considerable and began for me decades ago in the home of Toole’s mother, Thelma Toole, prior to the book’s publication,” DeDeaux says. “Then in 1991 I served as production designer for the first ever stage adaptation of Confederacy for which I produced dozens of drawings and character studies; these, and the deep appreciation I acquired for both Boethius and Toole, provide the foundation for this installation.”

​“Another deciding factor to produce this particular interpretation of the work is our world’s current relationship to nature and fate in a turbulent time of hurricanes, earthquakes, tsunamis and oil spills (not to mention terrorist attacks),” DeDeaux adds. “In this regard, the work has a very serious side in its embrace of disasters and resurrections. There is also something about wanting to know our future that strikes humbly into the heart of ‘humanness.’”

Striking into the heart of humanness, The Goddess Fortuna project is an absolute feast of the senses for Prospect 2 attendees, and fans of all things Ignatius. 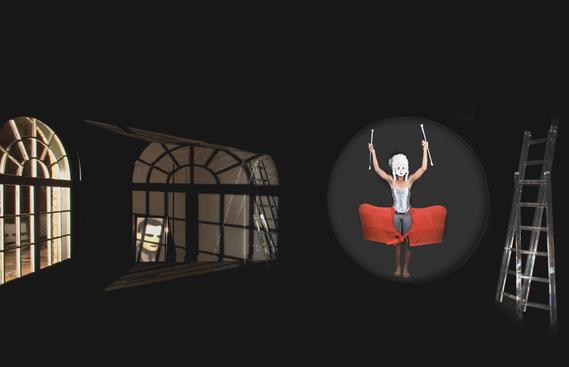 AFTER A SERIES OF STOPS AND STARTS, “PROSPECT.2 BIENNIAL” was finally launched on October 22 and will hold forth in New Orleans through January 29, 2012. Organized by Dan Cameron, this is not the same raucous affair as “Prospect.1” but is instead a more focused and intelligent group show. Whereas Prospect.1 had 81 artists in 24 venues, Prospect.2 is down to 26 artists. Works are displayed at sites throughout different neighborhoods, including the French Quarter, Tremé, St. Claude, the Warehouse District, City Park, and Tulane and Xavier universities. Venues range from museums and college galleries to public spaces and nontraditional exhibition spaces.

If visiting opening-weekend critics had stayed on to see satellite events such as “Music Box” at New Orleans Airlift or checked out exhibits at such local galleries and artist spaces as L9, Good Children Gallery, Antenna and T-Lot, to name a few, they would have had an enhanced awareness of a small but growing and sophisticated artist community in a special Southern city. In what I feel is a bold move, Franklin Sirmans of LACMA has just been appointed to be the artistic director of Prospect.3. Franklin is African American, significant in a city that is 70% African American, and a community not well exposed to contemporary arts. He is replacing Cameron, who, after two years of controversy but also devotion to Prospect, is accepting a position at the Orange County Museum of Art.

Prospect.2 has a number of well-known artists, such as Sophie Calle, Nick Cave, Jennifer Steinkamp and William Pope.L. Cave exhibits works previously viewed elsewhere, while Calle tweaks existing work for her offering. Steinkamp’s new video at New Orleans Museum of Art continues her exploration of change and mutability. Pope.L’s participatory photo-based project, which includes photos from local citizens, worked well only on the opening night, when his back-lit slide show was pulled through the streets on a trailer as a moving light box. Alexis Rockman’s large faux history painting is a florid parable of battling species and could pass for a surreal diorama in a natural history museum. Lorraine O’Grady’s documentary photos of an early performance work at the New Orleans African American Museum are of historic interest. An-My Lê’s delicate photos of the local Vietnamese community contrast with William Eggleston’s black-and-white portraits and strangely compelling video at the Old Mint building.

There is a solid presence of local artists, with colorful and biting representational paintings by Keith Calhoun, Chandra McCormick’s and Calhoun’s distressed photos, and paintings by self-taught artist Bruce Davenport, whose series of New Orleans parades suggests a sophisticated mind at work developing a signature style. Dan Tague at the Contemporary Art Center, presents a rambling politicized installation of elements that suggests an affinity with the Occupy movement. Upstairs, a group show of Louisiana artists gives an overview of artists not included in Prospect.2. In an effort to create a participatory event, Robert Tannen opened his new house on the levee near the Ninth Ward by hanging canvases on the walls and inviting the public to paint on them.

By far, though, the most intriguing and complex work of Prospect.2 is Dawn DeDeaux’s exuberant installation “The Goddess Fortuna and Her Subjects in an Effort to Make Sense of It All” at the historic Brulatour Courtyard in the French Quarter. This complicated mixed-media work is at once quintessentially New Orleans while announcing the presence of an artist who should have a much larger national profile.

The installation theme derives from John Kennedy Toole’s Pulitzer Prize—winning novel, A Confederacy of Dunces, famous for its rich depiction of New Orleans and widely viewed as the best and most accurate portrayal of the city in a work of fiction. The title of Toole’s tome comes from Jonathan Swift’s quote “When a genius appears in the world, you can know him by this sign: that all the dunces are in a confederacy against him.” Aptly, the travails of many creative people come to mind. The central character is Ignatius J. Reilly, a kind of modern, transgressive Don Quixote with issues. Reilly, not unlike many artists, feels he is not of this world. To mitigate his human failings, he invokes the Goddess Fortuna, who gives him bad luck and “joo joo” throughout his journey.

Open only at night, DeDeaux’s installation riffs on Toole’s evocation of fate and furies. The artist uses the three-story mansion to great effect. Off each story is a balcony, behind which are French doors and windows. Using various staging setups, including mannequins costumed with dunce hats that look weirdly like figures from the Inquisition, and a room full of masks and odd artifacts, she sets up a fun-house tableau on each floor. There are rooms you can enter and rooms that you view from the center of the courtyard, which boasts a wagon with a fountain that has distinct masturbatory connotations, consistent with the Reilly character. The rooms have video projections or staged lighting, which makes a dramatic impact. Looking up from the grounds of the courtyard, you can see ethereal, spinning videos. In a large downstairs room is a dance video, if one can call it that. DeDeaux cast the contemporary diva of New Orleans bounce music, Katey Red, to play the role of Goddess Fortuna, accompanied by two backup dancers as “the Wheelettes”—to spin the wheels of our fate. The energetic figures in the video have an uncanny optical effect of appearing disembodied in the outdoor courtyard through a device of reflection. I watched entranced through the windows of the room at the courtyard; it was truly disturbing, and inspiring. Worked from its literary source, DeDeaux’s zany, smart and wildly imaginative installation goes far beyond illustration to become an atmosphere that is indeed inhabited by the Goddess Fortuna.

The night I attended, I was alone in the installation and began to feel the spirits move. In this stupendous work of art, all that Prospect.2 could be—a national creative moment, a celebration of New Orleans, a cry for the irrational to inhabit the arts once again—was crystallized.

THE GODDESS FORTUNA / Review of Prospect .2 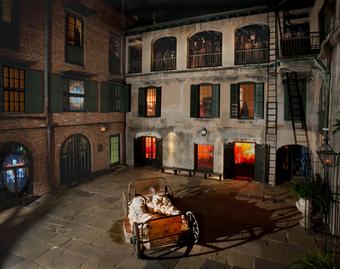 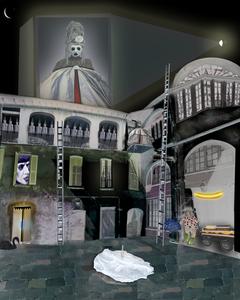 THE BEST OF PROSPECT 2 By Taylor Murrow

THE MOMENT THE SKY TURNS DARK is transformative. In the Brulatour Courtyard, it’s the time when Dawn DeDeaux’s perverted portrait of Ignatius Reilly comes to life, converting the romanticism of the historic courtyard into the dark imaginings of John Kennedy Toole’s A Confederacy of Dunces.  Those familiar with the iconic New Orleans novel will recognize central elements from the narrative in this installation. The Levy Pants revolution, the Lucky Dog cart, and Reilly’s hunting cap all make appearances; while Reilly’s slovenly bed occupies center stage of the courtyard, fountain spewing from its center.

In the novel, masturbatory Reilly, always spiteful towards the dunces of the outside world, is fixated on the goddess Fortuna, regularly invoking her in his long-winded philosophical dialogues. DeDeaux’s Fortuna takes form with full cosmic force as New Orleans sissy bounce artists Big Freedia and Katey Red. Masked and in surreal costume, accompanied by their attendant dancers, they float and gyrate to a bounce track, spinning their wheels of fortune. DeDeaux, known for her pioneering use of digital media, further tricks out the experience, manipulating projections and reflections to give the illusion of a hypnotizing Fortuna performing at the foot of Reilly’s bed, taunting onlookers. Her voyeuristic investigation into the fetishism and confusion of Toole’s novel utilizes seemingly every space in the courtyard to provide a one-of-a-kind sensory experience, extracting viewers’ own latent sexuality and fear, and heightening them to haunting effect.