CARLOZZI: Dawn Dedeaux's work is obviously theatrical, but from a much more charged and politically loaded perspective.  In many ways her work, too, investigates the self and adopts the perspective of social critic.  And her use of multimedia - video, xerography, new photographic techniques, and projection systems - bespeaks a willingness to risk it all to achieve a complex interaction of public and personal space.
FENTON:  In her new work, Dedeaux deals with the anguish of the soul in its human condition.  She uses Tennessee Williams' play 'Suddenly Last Summer' to dramatize the perennial savage nature of life.  Her tie-in of this tableau with in incomprehensibility of the AIDS epidemic makes a dramatic, theatrical, angry and anguished cry of Why?
CARLOZZI:  This new, more personal search follows on the heels of her recent work of the past five or six years, which was concerned with the glorification of violence, and the accoutrements of power and persuasion.  It's only natural after spending a couple of years working with juvenile offenders, and then creating the complex and moving multi-media installation 'Soul Shadows: Urban Warrior Myths,' that she has now turned inward with this much potency.  In some ways, she could not have conveyed the very personal statement of 'The Face of God, In Search Of' without  first experiencing the intense public response to 'Soul Shadows.'
FENTON:  One difference between 'Soul Shadows' and the new work is that Soul Shadows was a statement of: This is what is; this; this is the situation; these are young men, and these are their lives.  In explaining their lives within a mythical, heroic framework, Dedeaux revealed their role as heroes - as the necessary givers and receivers of of life and death - within their own society.  In The Face of God, In Search Of, she is asking larger questions:  Why the death of innocents?  Is this the vision of God?
...Dedeaux shows herself to be very much involved with moral issues.  All of her works are based on a strong commitment to the moral life.  In 'Soul Shadows'  Dedeaux took people who are not our role models and who are acting in what we might consider immoral ways, and vested them with a moral code that comes from within their own situation or society.  For 'The Face of God' she cries: Is this a moral universe? 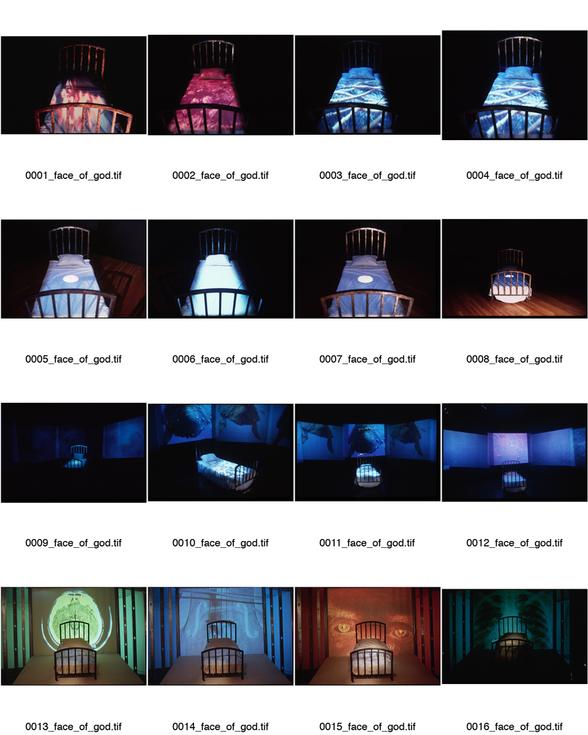 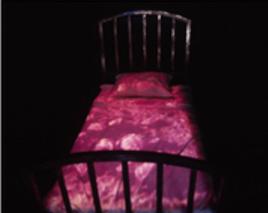 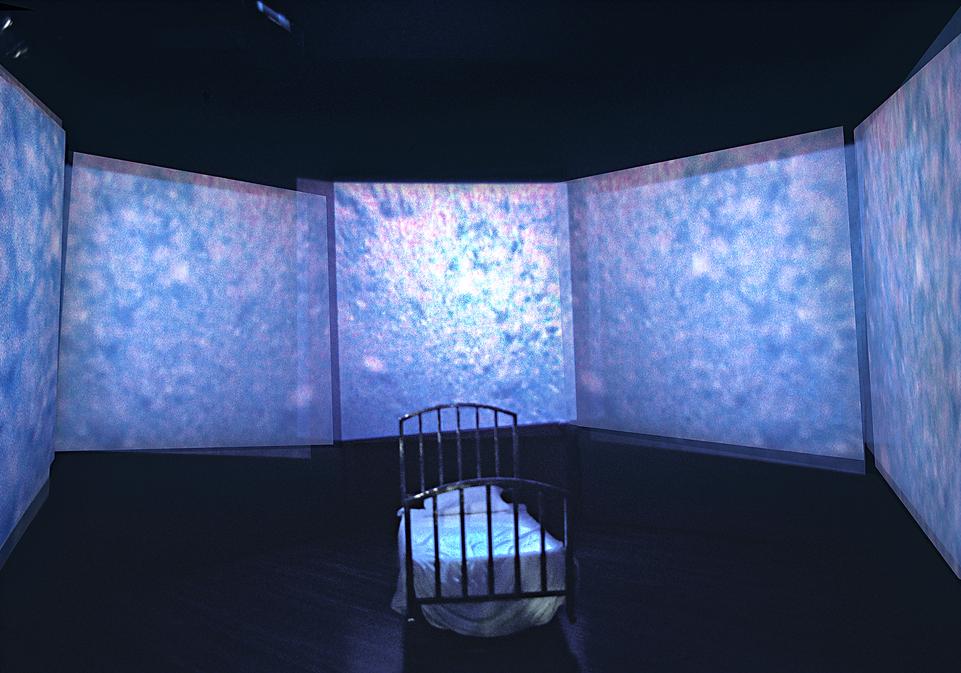 THE FACE OF GOD, IN SEARCH OF

Within the multimedia construction of an imagined bedroom, 'The Face of God, In Search Of' presents decomposing dreams and nightmares of nature's cycle.  Surrounding a solitary bed, the place of birth and death, the work imposes the external physical world upon the battlefield of man's inner physiology; and upon this, the collective struggles of humanity's survival amidst vast predatory instincts.

The room vacillates in extremes: at times open, seduced by breeze and moonlight; suddenly closed, airtight, a clinical florescent tomb for the final, futile effort to deny nature's claim.  'The Face of God' is a reflection box of nature's paradox - both majestic and indiscriminately cruel.  Conclusively, it is a requiem for inevitable mortality.

The principal metaphors in 'Face of God', as well as its title, are inspired by Tennessee Williams' play 'Suddenly Last Summer' written in 1952.  It aspired to position man within the whole of nature and primal instinct.  I do not think the play among Williams most successful, but it is circumstantially connected to one of my earliest artistic memories - my first artistic epiphany.  I was about nine when I saw the film version on late night TV, alone in my bedroom, unknowing of Williams or Picasso.  I did know that my seven year old sister had just been consumed before my eyes within two months from liver cancer, and sections of the film conjoined to form an indelible reference for the cruel side of nature and death.  It also aligned with my first spiritual crisis: there can be no God if a God would disfigure and kill a beautiful young child?

'Suddenly Last Summer' surrounds protagonist Sebastian, a privileged young poet who aspired to write only one poem a year.  He was also a vocational world traveller and his destinations were guided by his obsession to 'see the face of God.'  These expeditions led him to nature's battlefields of procreation and consumption.  After numerous years Sebastian claims to have at last found God while standing on an Encantadas' Beach in the Galapagos Islands.  There, for an entire day, he watched a bloody feeding frenzy as predator birds and iguanas devour thousands of hatching baby turtles, who instinctively struggle to reach the sea from their nests buried in the sand.  (Here I asked myself why Sebastian had to travel so extensively to find God within consumption?   We are born ourselves to be consumed, and for death we need not leave our bedrooms?

This specific spectacle of turtle slaughter sets the stage for Sebastian's own impending death, as days later he was  hacked with tin cans and, we are to led to imagine,  cannibalized by the Island's poor young boys - young  boys whom, we are led to suspect, were the sexually abused by Sebastian.  Here we have an additional layer of consumption - the instinct for sex,  second only to the instinct for food, takes hold.   His predatory actions also contradict his otherwise elitist, well mannered life of Sebastian, offering a third layer of  class consumption.  Sebastian's ritualistic death is therefore equal metaphor for a larger impending schematic of societal upheaval.

Going beyond the literal confines of the play and its templates of consumption and societal discontent,  'The Face of God' lastly overlays a late 20th century ecological perspective, accrued from mankind's gross global excesses.  Earth's vulnerability was not apparent to Williams or his generation, but it is clearly understood today that man, not bird, is the turtle's (and earth itself) most ruthless predator.

Global stability and sustainability now rest on man's ability to control himself as agent of death.  It can be argued that man's rage is increasing -  compounded by our loss of faith and our consciousness of existential death.  Prescribed cures for previous generations offer numerous religious portraits of 'God' - and some have beards.

Unlike the play's protagonist Sebastian who found his God in nature's consumptive cruelty, the autobiographical events surrounding my first viewing of Williams' play marked the first time that I questioned any existence of God at all.  And hoping that God did somehow exist, I launched my own cyclical efforts to rediscover God.

No doubt I have additional interest in 'Suddenly Last Summer' as it is largely set in my hometown New Orleans, drawing from indigenous characters and our obsession with Thanatos.  The socio-political implications of the play during the early fifties are unfortunately still applicable today in New Orleans, the murder capital of America, where the strategy to control the forces of nature are bankrupt.  Power structures are indecipherable; cops and robbers are indistinguishable, and, to parallel phrases from the text of 'Suddenly Last Summer' -  the 'emancipated birds' of the city are picking one another's eyes out and the men in 'white suits' are fleeing - fearing that in a short matter of time the 'barb wire fences' will no longer contain 'the clamoring ' of survival.  These social issues parallel themes of my earlier works related to urban warfare and suburban white flight, and now penetrate the core of my current work:  After observing the futility of society's efforts to control its brutal madness, I am logically drawn to the more rational systems of nature. 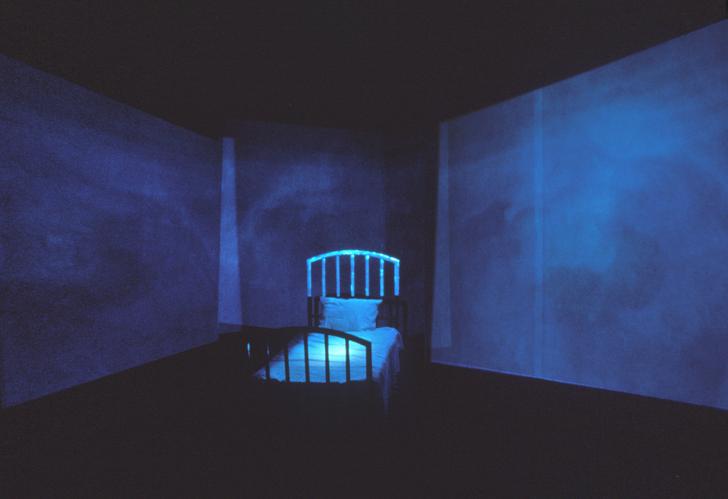 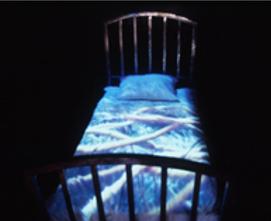