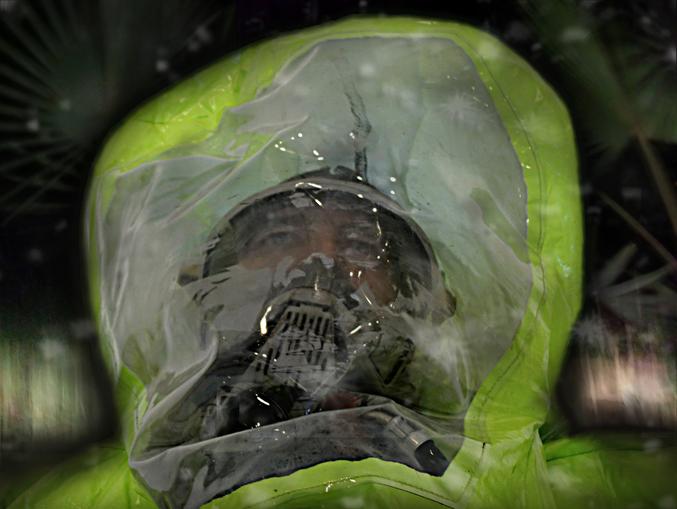 Space Clowns. From 2012 to 2016 the Louisiana-based artist Dawn DeDeaux created a series of images of astronaut-like creatures on metal panels, drawn in large part from photography sessions she conducted with first responders dressed in moderate to extreme protective equipment. DeDeaux later staged exhibitions of these digital photocollages, titled Space Clowns, in venues in New Orleans and Alabama as part of her larger MotherShip project, a work concerned with the kinship of climate change relocations and the disorientation of space travel.

Many of DeDeaux’s Space Clowns depict full-length silhouettes of figures in a kind of hybridized protective gear based on hazmat suits and diving equipment. (The original portraits were shot at the Robert Rauschenberg Foundation in Captiva, Florida, and the Tulane University School of Public Health and Tropical Medicine in New Orleans, where DeDeaux had art residencies.) The surfaces of the works are decorated with lace, floral, or wrought-iron patterns. According to DeDeaux, these biomorphic ornamental motifs will remind future space travelers of Earth’s lost bounty: as she writes, the explorers are adorned with “colorful curvilinear patterns belonging to our place of origin, a place called Earth. . . . It is imagined that even the most manly men now wear their flower suits like a badge of honor, a symbol of identity.” The appearances of DeDeaux’s space travelers are as important as their destinations, and, like the elaborate getups of the Sun Ra Arkestra and Parliament-Funkadelic, their costumes are a pastiche of historical references; while DeDeaux combines diving bells and radiation equipment, the Arkestra drew on the geometries of the ancient Egyptian visual canon, and Parliament-Funkadelic riffed on 1970s urban street fashion styled in futuristic metallic fabrics.

New Orleans. DeDeaux has discussed MotherShip as a reaction to the destruction wrought by climate change and the future potential wasteland of a human-altered ecology. Though these may seem apocalyptic musings, between the devastation of Hurricane Katrina in 2005 and the catastrophe of the BP Deepwater Horizon oil spill in 2010, DeDeaux’s native Louisiana has been hammered by ecological disasters that have made parts of the Mississippi River Delta Basin uninhabitable and threaten to destroy wildlife habitats throughout the Gulf Coast. The Ebola outbreak in nearby Dallas in 2014 brought a fresh fear to the region; at the time of a residency DeDeaux conducted there, Tulane’s School of Public Health and Tropical Medicine was among the leading combatants against the spread of the Ebola virus.

MotherShip. DeDeaux cites the architect-engineer R. Buckminster Fuller’s warnings about population expansion and reduced resources as inspiration for the project, stating, “I was in touch with Fuller in 1981 or ’82 just prior to his death to solicit an essay from him for a book I was aiming to publish titled ‘Out There: Man’s Invasion of Space.’” DeDeaux also makes no secret of the influence of Afrofuturism on the MotherShip project—it takes its name from the P-Funk Mothership, a “funk deliverance” spacecraft used as a stage prop in Parliament-Funkadelic’s large arena shows in the 1970s. The P-Funk Mothership acted in part as a heuristic object, delivering the lessons of funk bestowed by the mother, mother Africa. The mothership metaphor in the band’s mythology is powerfully joined to that of the parliament, a legislative body of government, as forming a collective’s identity. The word parliament is derived from the French parler, “to speak.” Invoking a deliberative body of governance, a parliament in this sense takes care of the Earth in anticipation of the return of the mothership. Parliament is a collection of voices, but, in every way, it cares for the Earth understood as a singular object: we have but one Earth.

As the theorist Kodwo Eshun has explained, P-Funk’s Mothership Connection is “the link between Africa as a lost continent in the past and between Africa as an alien future.” While Ra’s call to rapture Black people to Saturn with his interplanetary Arkestra, using the metaphor of the ark fleeing Earth, contested the history of slavery and its slave ship vehicles, the metaphor of the mothership, in contrast, invokes the concept of the brood, in which the big ship transports travelers to safety upon her return. It also inverts the concept of Mother Earth to instead envision technology as feminine and maternal, comforting children upon her arrival, and nourishing them with a funky party, initially the lavish P-Funk Earth Tours of 1976 and 1977.

Mothership Earth. Metaphors are powerful, and Fuller’s use of the now famous “Spaceship Earth” formulation puts forward a vision of Earth as a technological ecology created by humans. The concept of Spaceship Earth seeks to supplant the biological codependency of humanity and nature with a vision of a human-authored, technologically administered planet that can find surrogates in or be replaced by other spaceships—Spaceship Mars or Spaceship Europa, moon of Jupiter, perhaps. To redirect us from the plurality and profligacy of the metaphor of the spaceship, I propose a new metaphor—that of Mothership Earth, combining the two singularities of the Mother and the Earth. For in P-Funk lore the mothership is a singular object; one can have but one biological mother, and there is pointedly not one mothership among many. We cannot build our mothers as we would a spaceship; rather, they make us.​

Guardians. And yet. The fascination with outer space colonization, in the time of human-driven climate change, political upheaval, and a widespread health crisis, recently brought DeDeaux back to the photographic origins of Space Clowns. What initially seemed like mere source images for the baroque Space Clowns collages now appear as harbingers of a new kind of breath regulation. These first responder portraits, which DeDeaux initially shot using Rauschenberg’s own 8-by-10 camera in Captiva, she terms Guardians. The images present an eerie foreshadowing of the protections necessary to survive in the ongoing age of deadly airborne viruses. From mustard gas to nuclear radiation, from oil spills to gas leaks, from influenza (fowl or swine origin) to coronavirus (bat origin), humans have created countless situations in which air has been made toxic and unbreathable due to alterations to ecologies and encroachments on and the destruction of wildlife habitats. In Fallout (2013), one of DeDeaux’s photographs from Guardians, a man in a neon-green cloaked hazmat suit with a clear visor gazes above the viewer’s line of sight. Photographed at an extreme horizontal angle from a perspective beneath his chin, he appears reclined, and his fixed stare lends him a preternatural stillness that is almost corpse-like. Wearing a ventilator beneath his face shield, he assumes an uncanny, cyborgian quality. As he looks upward, the blur of palms and other plants around him gives the impression that he is moving in space, plunging backward in a vertiginous fall. The isolation of his stuffy, fogged-up suit keeps him from the surrounding jungle of vegetation, a habitat on Earth that humans once traversed naturally, effortlessly, without fear of whatever hazardous condition from which he is insulated. In the Guardians series, DeDeaux is reassessing the ways in which our current moment has returned to consciousness the insecurity of ever being fully protected against often invisible threats like warming oceans and disease, or of being prepared for the unpredictable effects of the depletion of life-sustaining resources on Mothership Earth. As she states, “During the [coronavirus] quarantine I have come to value equally my straightforward photography of responders. The decorative aspects of the [Space Clowns] work went extreme future tense, imagining us already exiled from the planet, when the curvilinear lines of flora and fauna superseded the straight lines of flags in terms of conveying our place of origin, Earth, as we drifted further and further away, looking for its closest replica. It is the natural world of earth and rain, the fresh water, that shaped the aesthetic of our planet and perhaps our future wardrobe signifiers. . . . [Yet] the original portrait photos offer a greater punch of evidence for our NOW. This time of alienation is REAL, and the unadorned photo seems more poignant.”
​