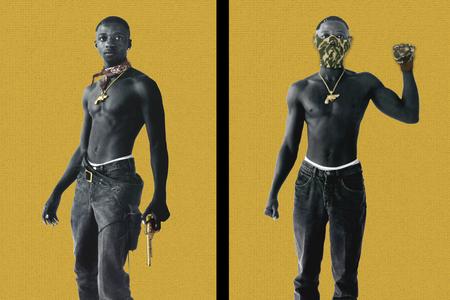 URBAN WARRIOR SCRAPBOOK is a video work and installation component by artist Dawn DeDeaux created in 1990 and exhibited at varied venues throughout the United States into the fall of 1993 as part of her traveling exhibition “Soul Shadows.”  Selections from the larger exhibition were also presented at Whitney Museum of American Art in 1995.

The video features the late Wayne Hardy, a New Orleans gang leader, who shares a story of his life while turning the pages of his personal scrapbook. The biographical vignettes were prompted by the collected photos of the friends and family within.
His accounts and opinions are set within a time New Orleans was known as the "Murder Capital of America" and throughout a period of the city's history when police corruption was equally notorious.

The local press somewhat mythologized the brothers, dubbing them "The Hardy Boys."  Wayne Hardy and brother Paul were dominant players on this city stage, infamous in the art and quantity of drive by shootings against rival gangs, and, as revealed a decade later, for their collaborations with corrupt members of the police force - most notably policeman Len Davis now on death row.

URBAN WARRIOR SCRAPBOOK is one of several video works DeDeaux produced of The Hardy Boys.  This one features only brother Wayne who shares his aspiration for power and status, often measured - herein, and throughout recorded history - by the quantity of gold artifacts owned and displayed.. There is no greater example of street power than that reflected in one of  Wayne's necklace medallions – a solid gold gun measuring six inches long, embedded with 96 diamonds.  This object appears frequently in the Scrapbook self portraits, and often adorning the neck of his heir, his four-year-old daughter “to show respect…and that she is not to be messed with…”

Gold is a timeless emblem of power, and  once again is tapped to convey ironic symbols of dominance in both the backstreets and the Wall streets of late 20th century Rolex culture. 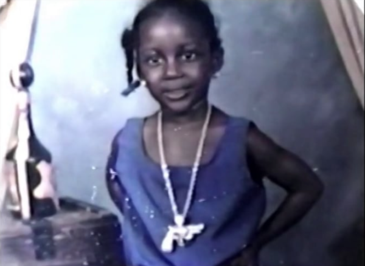 Wayne Hardy’s presentation of himself bejeweled in gold throughout the pages of his scrapbook prompted a responsive series of works by DeDeaux titled the "Warrior Icons Series.”   This series offered 26 life-size, gold-leaf-slathered-portraits of Wayne Hardy posed as varied warriors throughout the mythologies of recorded history and concluding withMutually determined by Hardy and DeDeaux after a considerable phase of show and tell, the warrior sweep concluded with contemporary pop interpretations of John Wayne as “Cowboy” and Sylvester Stallone’s offering of “Rambo.”

A selection of these latter life-size portraits of Wayne Hardy were exhibited at the Whitney Museum of Art in the 1995 exhibition “Black Male.."

DeDeaux lobbied for the importance to include the related video Urban Warrior Scrapbook together with the iconic portraits to Black Male curator Thelma Golden: This would allow the real black male subject and collaborator, Wayne Hardy, an opportunity to speak for himself.  Golden repeatedly turned down this request arguing for her vision of a very quite exhibition environment..  DeDeaux's final plea offered a 'headset' attached to the wall for viewers to hear at least the audio of Wayne Hardy, but this, too, was turned down.

However, by opening night an Adrian Piper's Sound Box  with an amped up SuperFly  soundtrack had been rolled out and placed in proximity to DeDeaux's portraits.  One might deduct that an exhibition addressing black male stereotype in effect stereotyped its lone white participating female artist?  By denying viewers access to Wayne Hardy's own words, did this skew interpretation of the art to serve a subjective curatorial platform?