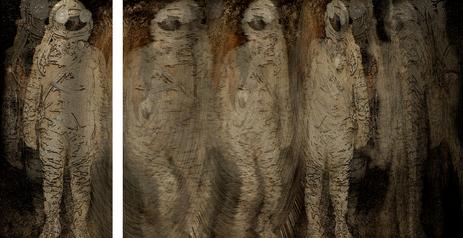 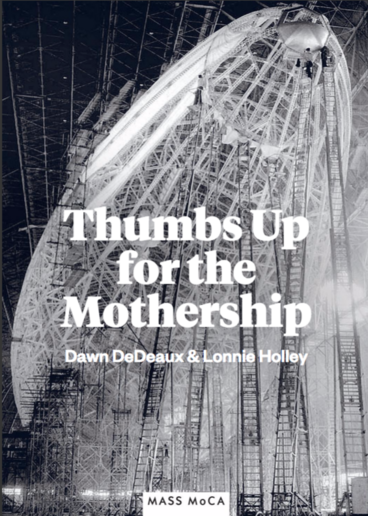 Prophecy and Free Will in

FREE FALL is a large-scale sculpture installation by New Orleans-based artist Dawn DeDeaux created for Kansas City's international art venue OPEN SPACES led by veteran Artistic Director Dan Cameron.  The work tributesParadise Lost by John Milton published in 1667, considered among the world's most important literary offerings.  Selections from the epic poem appear on 48 concrete columns, installed at angles as though in a state of fall throughout a quarter mile section of the majestic Swope Park.  The text is generated in highway reflective vinyl to offer distinctive appearances that vary from day to night:  by day the text reads in subtle pearlescence typography;  and by night the verse transforms into a glowing vibrancy before the light of cellphones and headlights of passing cars - creating a moving, ever-changing choreography of light and language.
The main installation is on a ridge in a walnut grove adjacent to the Starlight Theater and Kansas City Zoo (at the intersection of Zoo Drive and Starlight Road). At the top of the ridge a cluster of columns suggest an archeological ruin while others cascade down the ridge face.  Additional columns are sited to offer a meandering, intimate walk at woods' edge for more accessible readings.  Cellphone light both activates the columns' reflective properties and the barcodes applied to columns to prompt corresponding audio readings.
ABOUT MILTON
All text on the columns is verbatim old English used by Milton to write ‘Paradise Lost’ -  a secular retelling of the biblical account of the fall of Adam and Eve. The book also intertwines the best philosophy, art and scientific discoveries of the 17th century.  One finds overture to the classics by Homer and Virgil and cosmological offerings about planets, time and the speed of light inspired by Milton's encounter with astronomer Galileo.  The fierce politics surrounding England's Civil War and Milton's personal involvement with the overthrow and execution of Charles I also shape the work's extensive ethical debate.
DARKNESS VISIBLE
Among Milton enthusiasts a beloved word coupling in Paradise Lost is "darkness visible" - inspiring the use of highway night reflective vinyl for the text that glows in the dark. In addition to 'darkness visible' as metaphor for Milton's views on hell and politics, here the illuminate text also acknowledges Milton himself and his personal crux - he was blind! One can only imagine the challenge of composing and memorizing his verses by night then dictating from memory by day -indeed making a 'hell of his heaven.”
PARADISE LOST and FOUND TODAY
While centuries-old, Paradise Lost reads with relevance for today, seeming at times to be a more insightful projection of our future rather than a tale of our past. From an environmental perspective it offers a prophetic nature: Are these the days, now, when our earthly paradise is lost?
Other scattered barcodes activate the verse of contemporary rap artists such as J Cole whose lyrical constructs share remarkable kinship to Milton's themes.  J Cole offers “If this is anything like heaven, I’d be better off in Hell”; while Milton counsels that “Man can make a Heaven out of Hell and a Hell out of Heaven.”  Each author shudders at their visions of the future, claiming in most cases it is “better not to tell.”
ARTISTIC AWAKENINGS
The trajectory for project FREE FALL began five years ago with the start of DeDeaux's post-earth MotherShip series. It was first inspired by an interview with the late Stephen Hawking who claimed we had 100 years left, not to save earth but to figure out how to leave. A sampler from DeDeaux's accumulated future-tense multimedia works is now on view at MassMoCA through 2019 in an exhibition titled ‘Thumbs Up for the Mothership’ where she is paired together with artist and musician Lonnie Holley. Other examples will appear in an upcoming career retrospective ‘Between Worlds’ organized by New Orleans Museum of Art
For DeDeaux the falling columns also acknowledge the lessons of history past and present: the fall of civilizations reflected in the ruins of Persepolis, the ISIS terrorist-ravaged site of Palmyra and today’s dismantling of monuments worldwide in the reexamination of wars and heroes.
THE IMMINENCE of FREE WILL
DeDeaux's FREE FALL is also influenced by the view from her home base in coastal Louisiana - the fastest eroding landmass in the world.  "This literal 'vanishment' of place is due in large part to the short-sightedness of industry and politics, all supported by the products we individually buy and the people we individually elect.  This complicity led me to re-conjure Milton and his identification of the imminence of free will.  We either succumb to a fatalistic future or courageously commit ourselves to a bold new course."  Milton calls free will the defining characteristic that distinguishes man from other animals and the natural world. According to curator Dan Cameron, 'if we lose our paradise on earth it will be because not enough of us exerted a sufficient amount of our free will to save it." 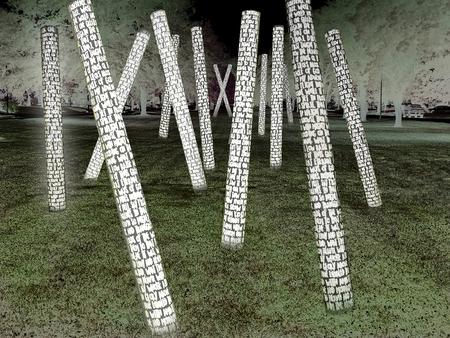 BEING AND EVERYTHING: POST ART by Dawn DeDEAUX
Essay by Surpik Angelini
Curator / Founding Director
​TransArt Foundation for Art and Anthropology / Houston

DeDeaux's Post Art trajectory was sharpened by Hurricane Katrina’s devastation of her habitat and most of her work, and the escalating extinction rate of planetary species. Her art turned more purposely to the materiality of the object, not as a representation of reality as we know it, nor as a found artifact remitting to Duchamp’s "readymades." Instead, DeDeaux embraces an all-encompassing notion of “object" understood as “everything” - an “everything” where even the causality of all things can be fathomed to radiate from the “object” itself into the unknown. (2) 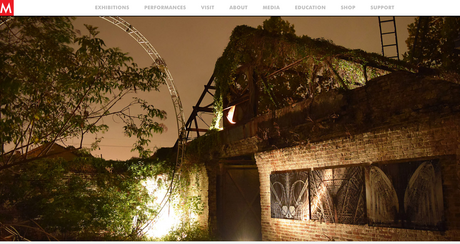 For Art and Anthropology 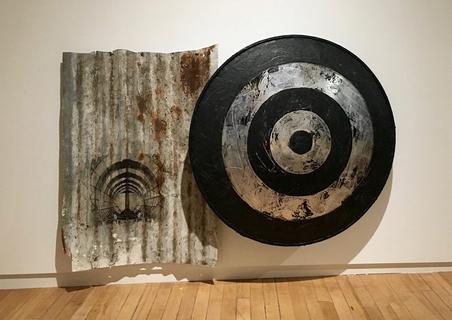 THUMBS UP FOR THE MOTHERSHIP
OPENING MAY 28 2017 / Marking the first exhibition in a series that is designed to give an extended public forum to artists who have participated in the Captiva studio residency program of the Robert Rauschenberg Foundation, Thumbs up for the Mothership features individual works as well as a collaborative installation by New Orleans conceptual artist Dawn DeDeaux and Alabamian self-taught sculptor and musician Lonnie Holley. Deeply influenced by their southern roots, both artists mine the landscapes around them for found objects (a nod to Rauschenberg’s “combines”) and engage in dialogues around issues of ecology and social justice. DeDeaux and Holley firmly believe that through art, they can address these issues and “help heal the mothership.” Both DeDeaux and Holley frequently experiment with mixed media and incorporate performance into their practice — ranging from totemic found objects and photography to experimental blues music and Afrofuturist philosophies. These artists share a deeply held sense of resoluteness and optimism that infuses their art. Holley states: “There are so many rocks and so many broken stones and so many nails and sticks and weeds and debris and garbage and trash. We have to plow and mine the worst things on this earth to make them better, and to make us better, so we can show the world: I can handle it. I can deal with it. I can live with it. I can go on.” 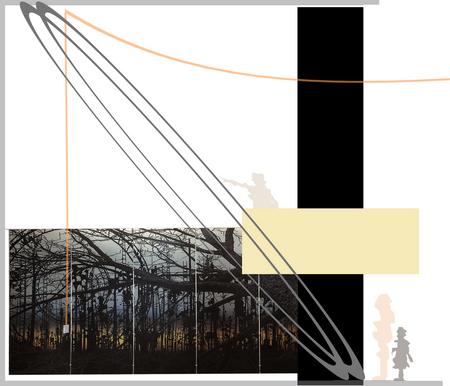 AND IT WAS YESTERDAY 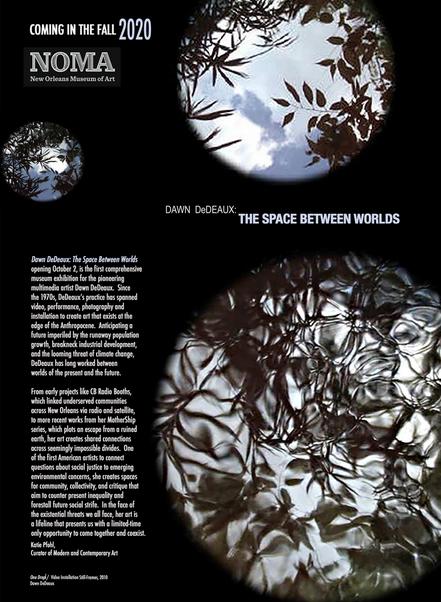 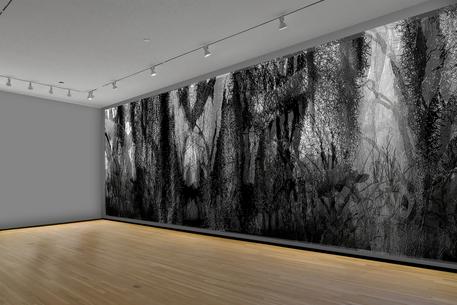 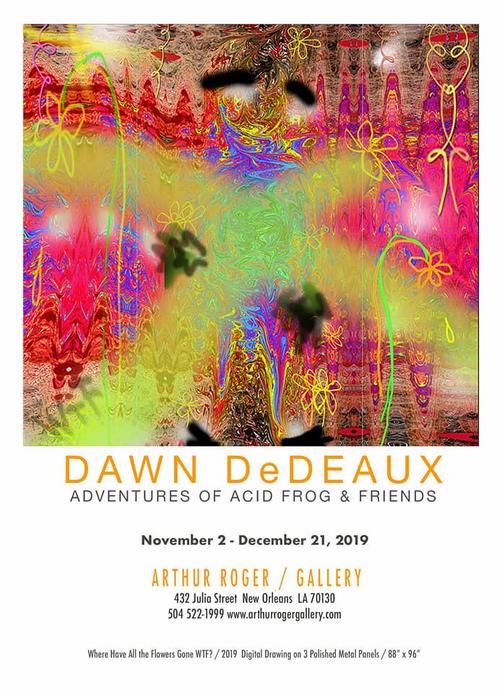 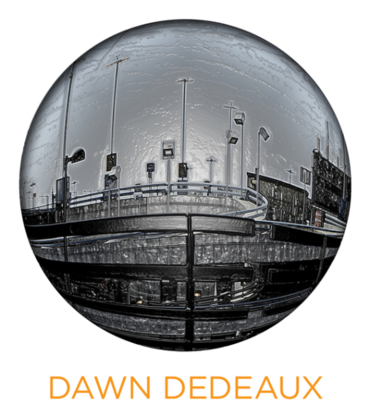 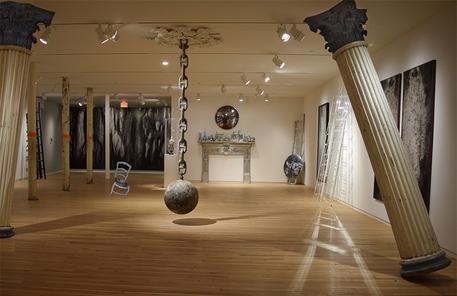 Transart Foundation for Art and Anthropology is pleased to present Being and Everything, an exhibition by regarded national artist Dawn DeDeaux that includes new works-in-progress and selections from the past fifteen years influenced by a string of events including Hurricane Katrina, the BP Oil Spill and Louisiana’s vanishing coastline, the fastest eroding landmass in the world.

DeDeaux has been at the forefront of envisioning a post-anthropocene world as part of her decade-long MotherShip Series - with components recently on view at MassMoCA, and throughout the development of her Space Clowns series featured in the Fall 2020 issue of Aperture Magazine.  Her work has addressed scenarios such as the current pandemic, the impact of environmental conditions on habitat, and how survivors will adapt to a material and existential collapse.

Throughout her six month residency at Transart, DeDeaux will utilize the galleries as a staging lab to complete works for the final rooms in her upcoming Career Retrospective at New Orleans Museum of Art - The Space Between Worlds - opening in the Fall 2021 concurrent with the city's international triennial Prospect.5. The retrospective will connect her work from the 1970s with its sharp focus on social justice to her latter works that place environmental justice front and center. The exhibition will be accompanied by a comprehensive catalogue by Berlin-based publisher Hatje Cantz. 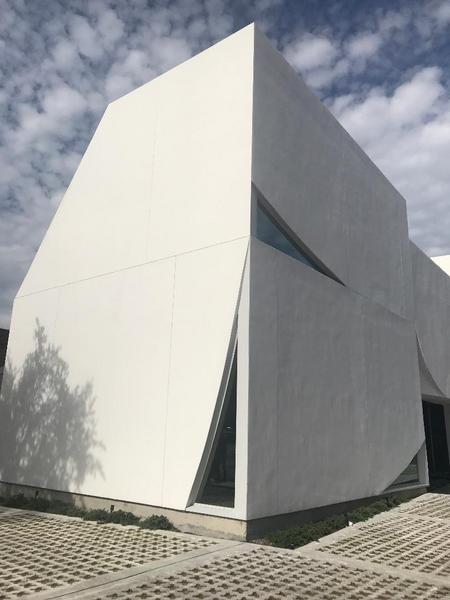 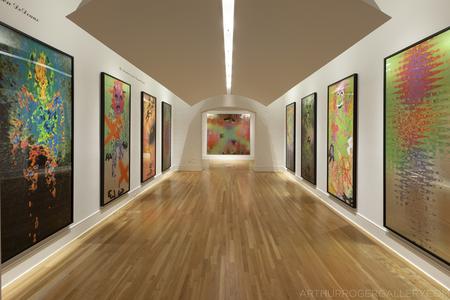